Touching down in Kuala Lumpur after two weeks in wild Sumatra was a bit of a reverse culture shock. From Padang’s “International” airport , which consisted of a few small rooms, one food outlet selling nasi goreng (fried rice), and barely-working air conditioning, we found ourselves transported to a city of gleaming skyscrapers, mega shopping malls and hectic street markets. For the first time in months, we used clean, reliable public transport to take us to a clean, comfortable hostel. It felt good to be back in a cosmopolitan city.

We spent our next three days in Kuala Lumpur. First we explored the nearby Batu Caves; a series of caves within a limsetone hill filled with Hindu temples and shrines. Despite the impressive statues and shrines, the numerous monkeys stole the show. There were monkeys everywhere, and many of them looked at us with expectant eyes, hoping we were some of the tourists who had ignored the many warnings and brought them food. Thankfully we didn’t have any food, so the monkeys largely left us alone, but not everyone around us was so lucky. 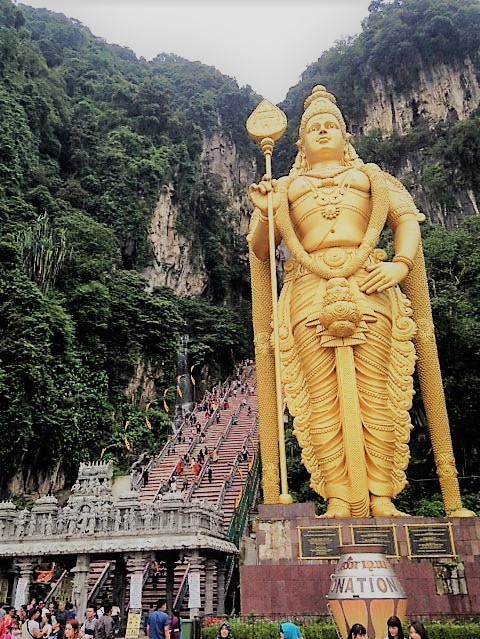 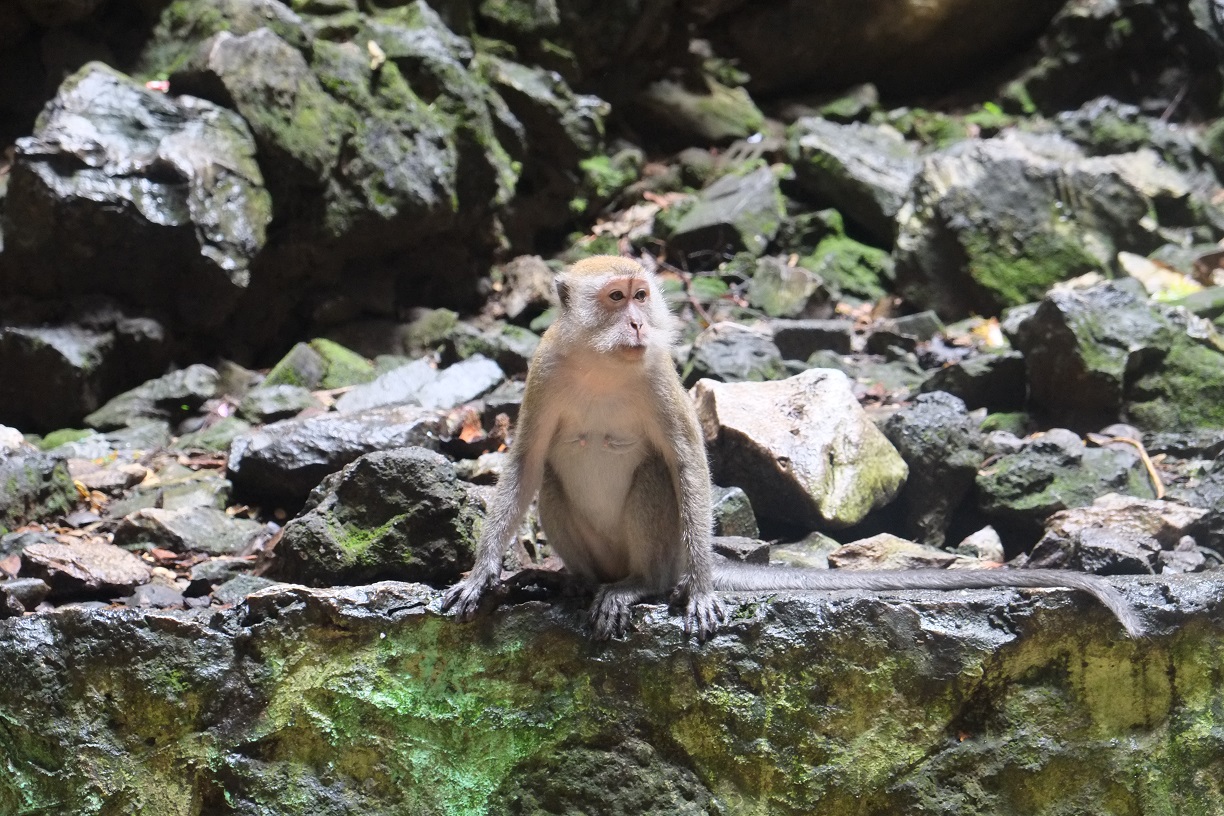 Monkey searching for his next meal

Next on the itinerary was a free walking tour around the city’s heritage buildings with a Kuala Lumpur history lesson. Shane was in his element, and despite the heat, the mosquitoes (who, as usual, treated me like a walking snack), and my general aversion to walking history tours, even I enjoyed it! 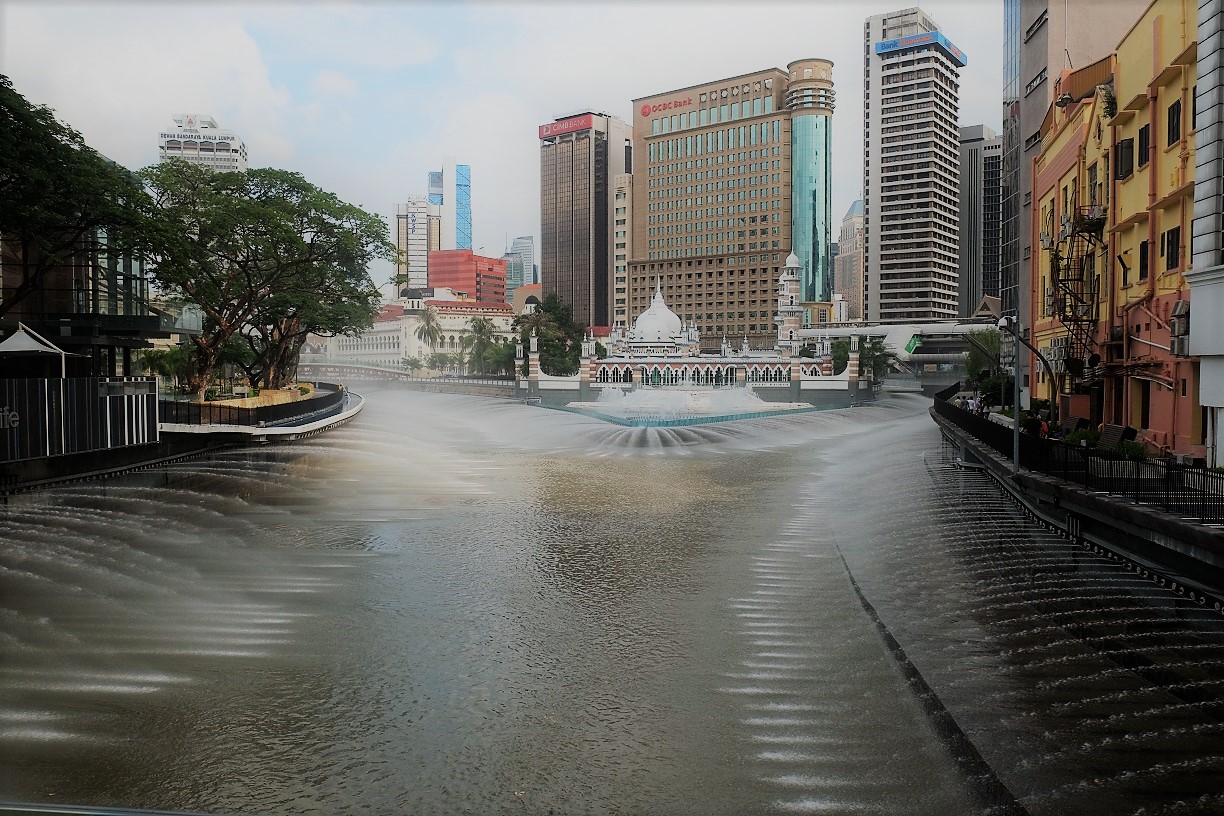 The “kuala” (estuary) in Kuala Lumpur

The remainder of our time in Kuala Lumpur was split between two very different areas: the extravagant shopping centres and iconic buildings of Kuala Lumpur City Centre (KLCC), where we visited the famous Petronas Towers, and the more budget-friendly Chinatown, where we ate delicious Chinese food and slept in the simple Explorer’s Guesthouse without breaking the bank.

Wandering the shopping malls of KLCC was slightly surreal, as Christmas seemed to appear out of nowhere. Decorations filled the spaces, stores stocked woolly hats and fluffy jackets (despite the fact that the temperature outside was a consistent 32 degrees), and we even stumbled upon Malaysia’s largest Christmas tree. 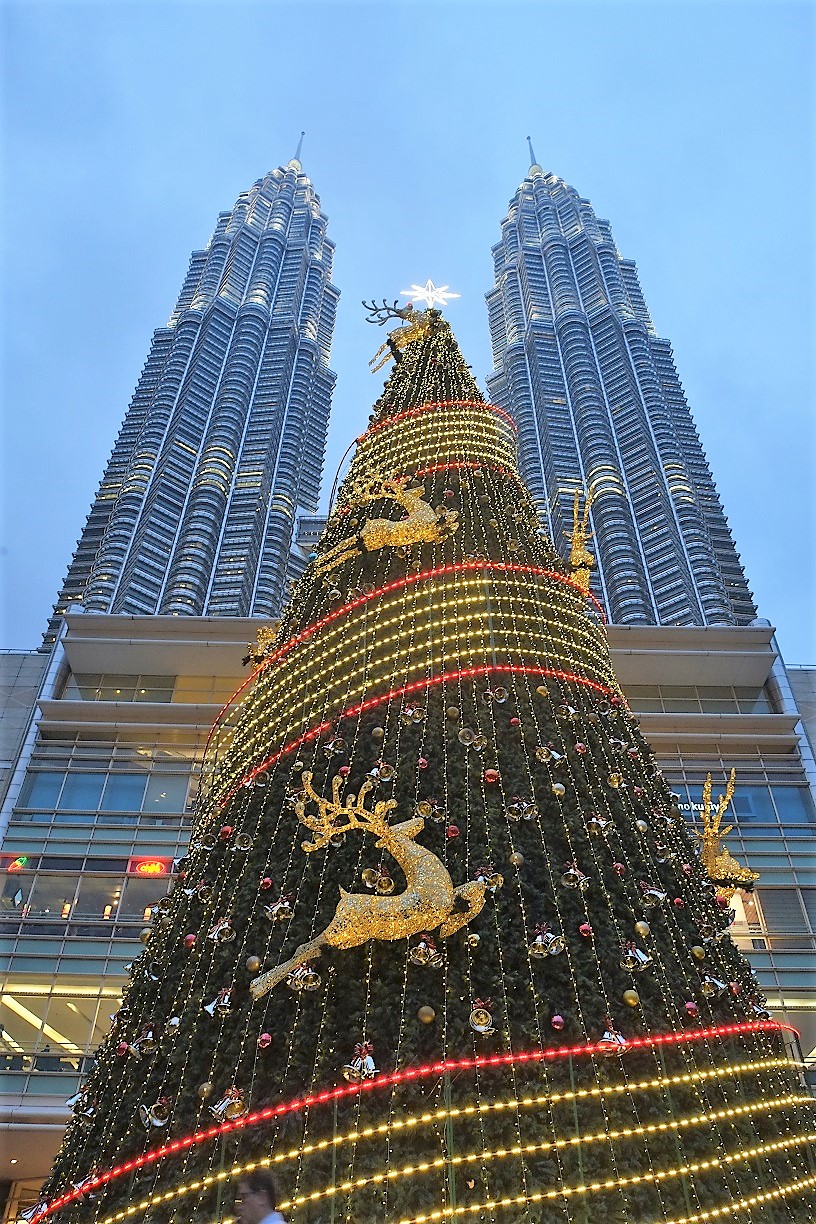 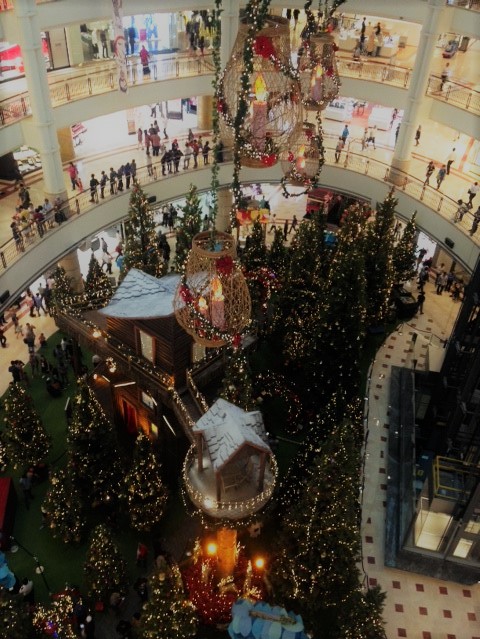 Why have one Christmas tree when you can have 30? 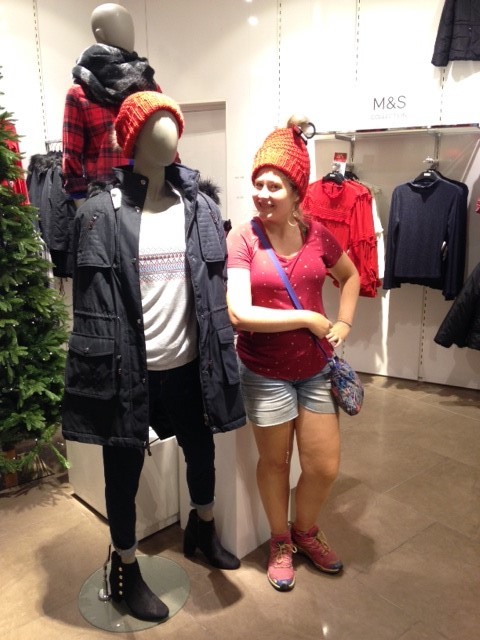 Got my woolly hat all ready for the tropical temperature

Our visit to the Petronas Towers themselves was a little underwhelming. At 85 Malaysian Ringgits (£15) per person, visiting the towers was relatively expensive by Malaysian standards, and while the towers looked distinctive and impressive from the outside, the inside was a bit disappointing. We booked tickets for 6pm, hoping to see the view during the last daylight hours, the sunset and at night. Unfortunately, we didn’t realise we’d only be allowed to stay for about twenty minutes, so there was no sunset watching for us. As it happened, it didn’t really matter because the weather was so hazy that we couldn’t see much anyway.

As if that wasn’t sad enough, as we struggled to look at the view, it began to dawn on me that something was missing. The iconic Kuala Lumpur skyline has the Petronas Towers in it, but of course we couldn’t see them, because we were in them. Epic fail. 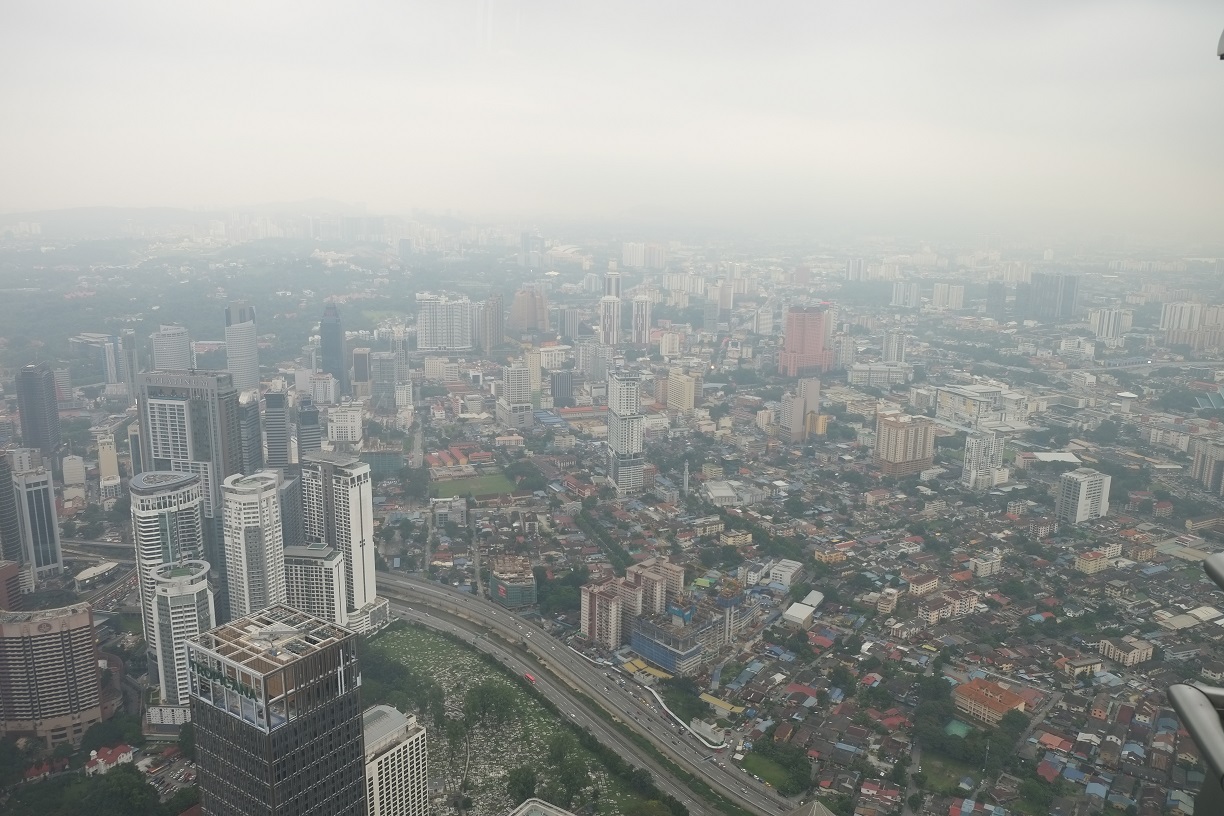 Underwhelming view from the Petronas Towers

After our short time admiring a hazy, uninteresting view, we left the Petronas Towers and walked a short distance to Traders Hotel, where we had heard it was possible to get a good view of the towers from their top-floor bar. Sure enough, as we reached the top floor of the hotel, we saw the view we had been waiting for (as well as the hotel’s swimming pool) and settled down for a drink, snack and a few photos.

A better view of the Petronas Towers

From the glitz and glamour of city skyscrapers, enormous Christmas trees and rooftop bars, we headed back to the slightly grimier Chinatown. Overall, we enjoyed our time in Chinatown: our accommodation at the Explorer’s Guesthouse was cheap, clean and welcoming, and we found an amazing but very inexpensive Chinese restaurant close by. Unfortunately that wasn’t all we found. Chinatown seemed to be THE place to get a fake watch, and we also stumbled across some local wildlife which made us question our life choices:

From Kuala Lumpur we caught a bus to take us all the way to our next stop: Singapore. Shane was a little sceptical about how long the bus would take, but I reassured him that this was a non-stop bus that would only take five hours, and that this was the quickest and simplest way to get from one city to the next. When the bus arrived, it was comfortable, air conditioned and there was a big sign outside that promised free wifi. It seemed that we had hit the bus-jackpot.

Unfortunately, once on the bus, we noticed a much smaller sign inside printed on a piece of A4 paper that said “sorry wifi not working”. Half an hour after after leaving Kuala Lumpur, our non-stop bus stopped to pick up more people. Then we got stuck in traffic. Then we stopped again for fuel. Then again. And again, for lunch. By now, five hours had been and gone, and we still had a significant distance to cover and a border to cross.

When we did eventually get to the border, another surprise was in store. If the queue at immigration is on the long side and you take too long to pass through it, it turns out the bus will leave you behind. Thankfully Shane and I picked a fast-ish moving queue, so we were through immigration and customs just about quickly enough. One of our fellow backpackers wasn’t so lucky. Despite Shane asking the bus driver nicely to wait for him (he was only a minute or two bit behind us), the bus drove off and abandoned him at the border.

When we reached our hostel in Singapore, the receptionist asked where we had come from. “We got the bus from Kuala Lumpur,” I replied. She looked surprised: “You must have got up early”, she said. “Usually that bus takes at least ten hours.” Good to know.

If Kuala Lumpur had caused reverse culture shock, Singapore took it to another level. The city was clean, modern, easy to navigate and full of beautiful, impressive buildings (including the extravagant Marina Bay Sands Hotel). 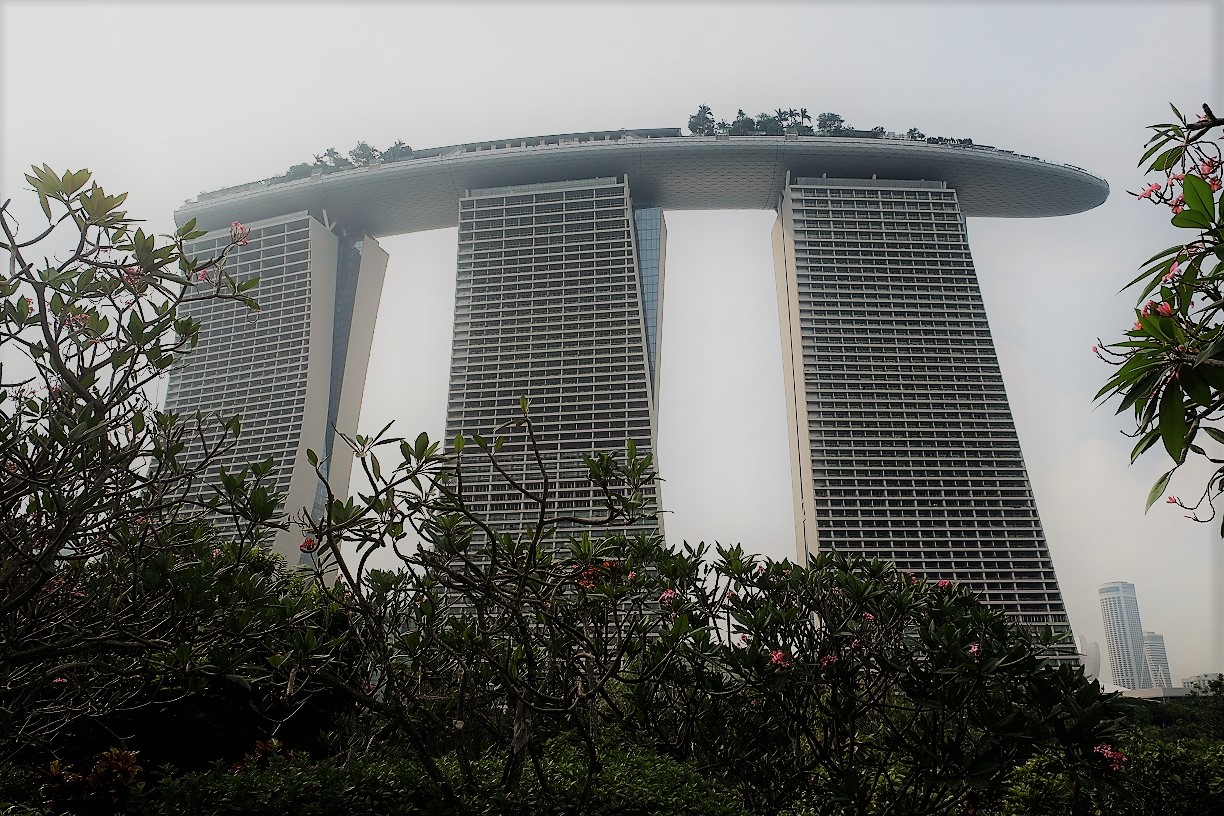 We conducted our own walking tours of Singapore’s Chinatown and Little India, which were like sanitised, fairytale versions of China and India – colourful neighbourhoods with interesting temples and delicious Chinese and Indian food, but with the addition of clean toilets, clean public transport and expensive shops. A particular highlight was the Chinatown Heritage Centre, where we learned about how the people who first settled in Chinatown used to live, and explored Chinatown’s interesting history. 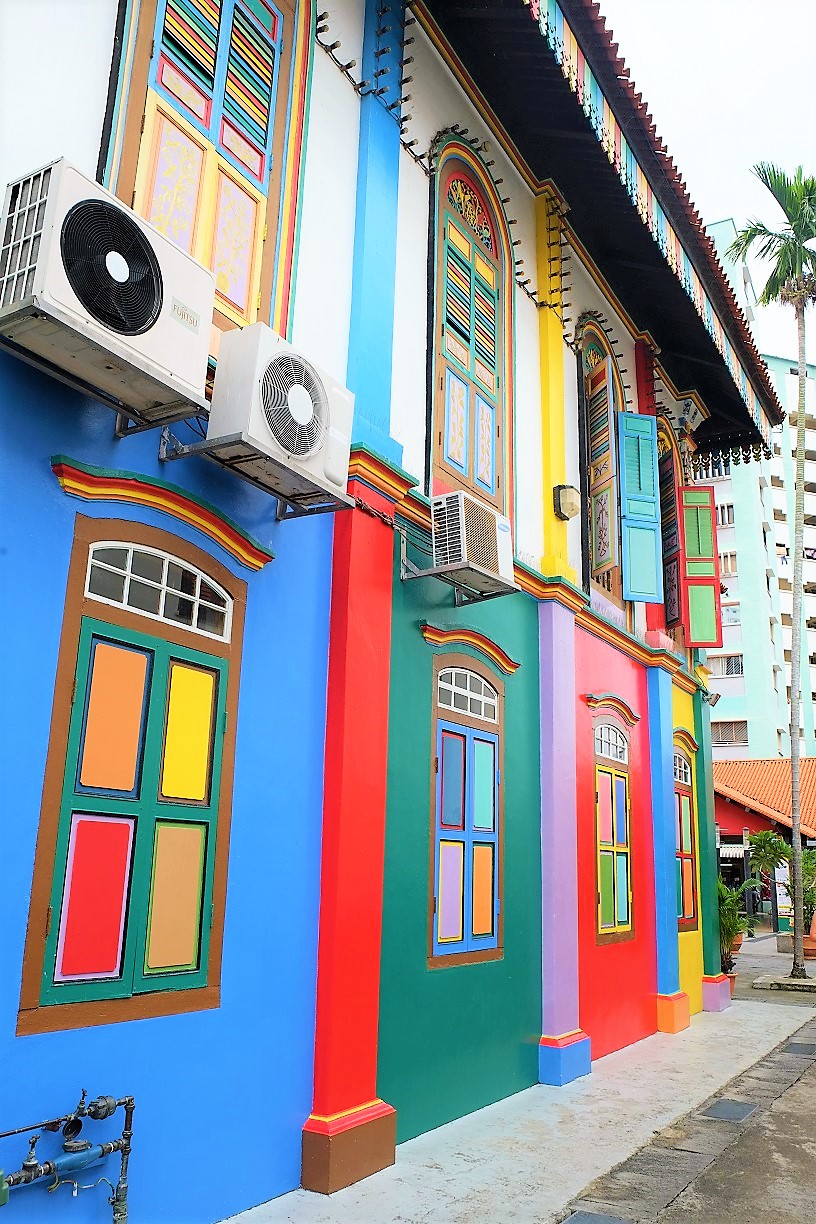 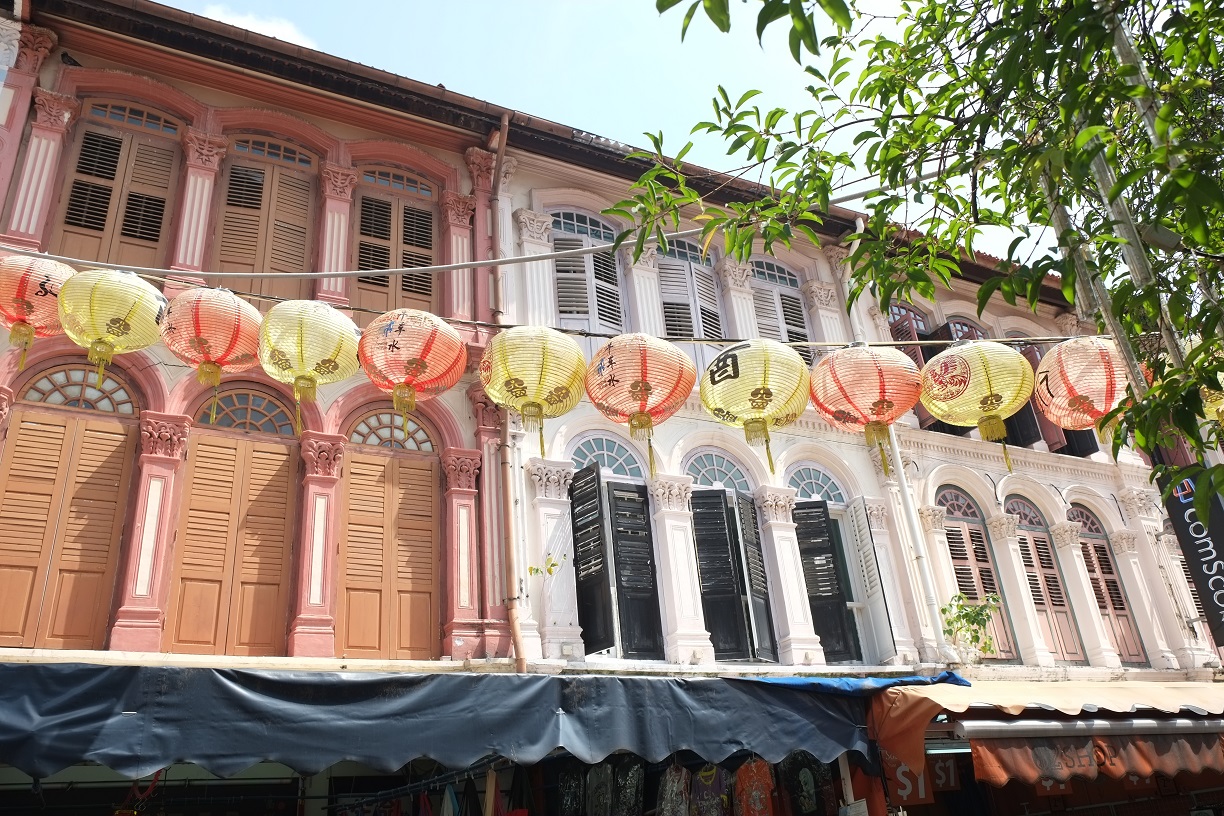 Continuing our history lesson, we took a trip to the battle box museum – an underground bunker used during the second World War where the British generals decided to surrender Singapore to the Japanese. The bunker lay forgotten and untouched for many years and has only recently opened to the public, complete with an excellent guided tour.

We also visited the impressive Gardens by the Bay; a huge green garden in the heart of the city. We marvelled at the supertrees which light up at night and explored the huge cloud forest and flower domes. The gardens were amazing, and the night time light shows at both the Gardens by the Bay and the Marina Bay Sands were magnificent, but despite the ultra-cleanliness, efficiency and perfection of Singapore, somehow it all felt too good to be true. 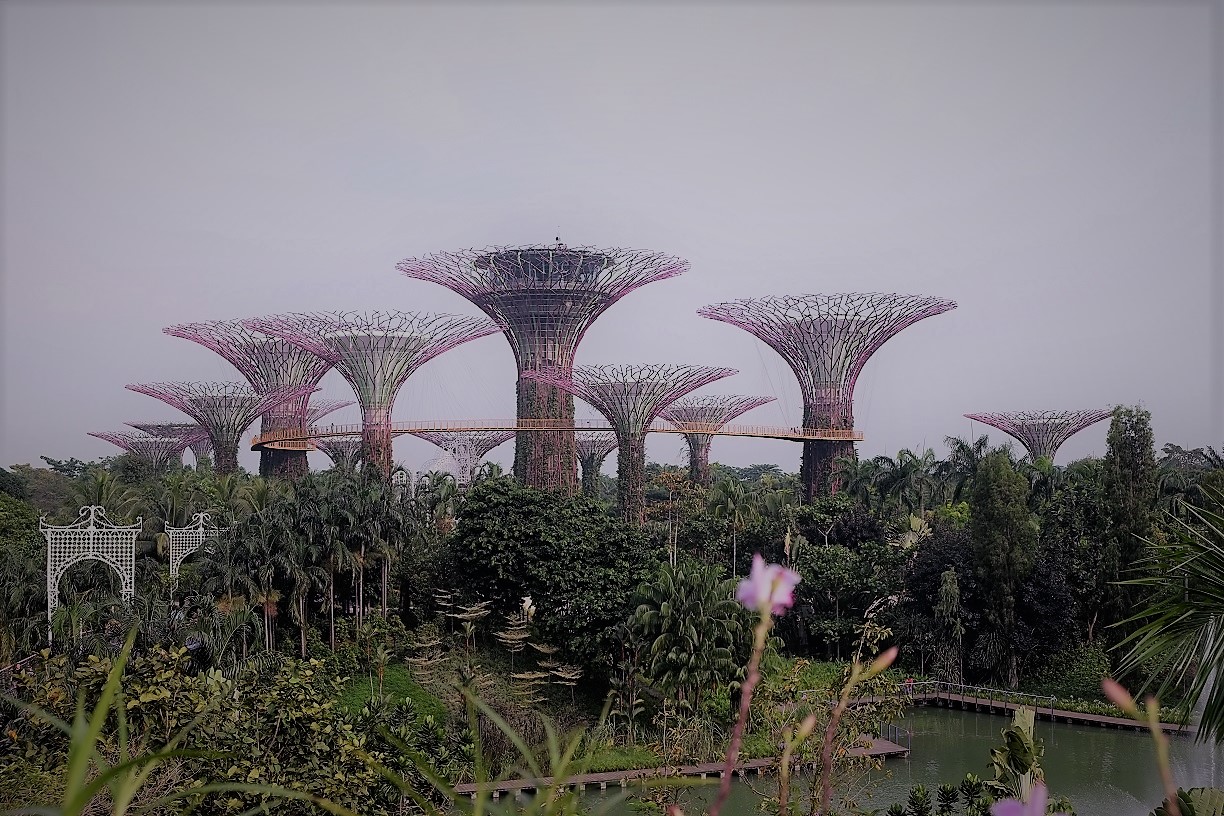 Supertrees, gardens by the bay 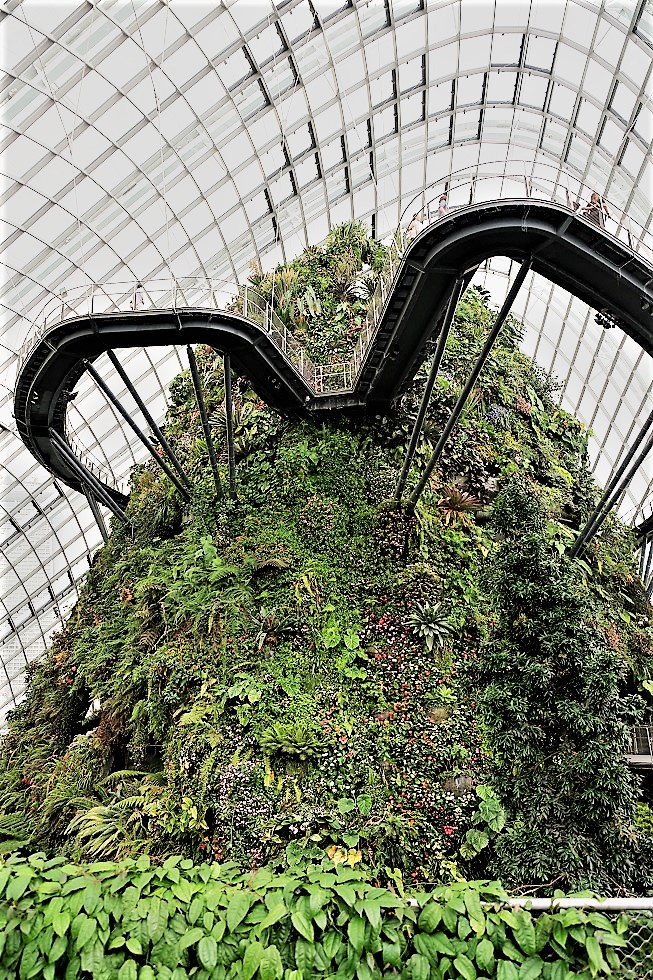 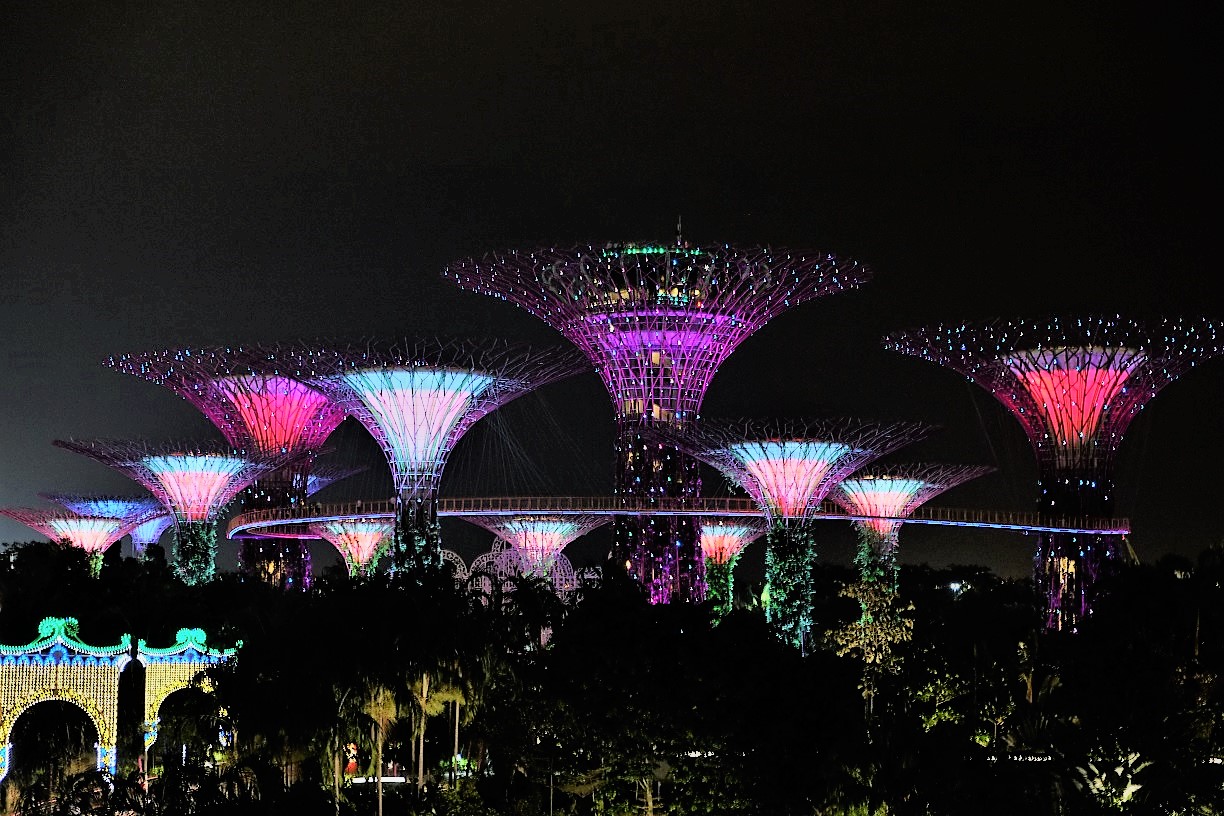 Singapore is sometimes called a “fine” city; not just because it is a fine state, but because you can be fined (or worse – face prison or even the death penalty) for just about anything:

With this in mind we did our best to stay on the right side of the law at all times!

While in Singapore, we visited Shane’s family friends Billy, Sonia and their daughter Sofia. Sonia took us out to see Singapore’s hot spots to eat and drink, including Potato Head in Chinatown, where we had the best burgers we’ve ever eaten. The next morning, Sonia cooked us a proper Irish breakfast in their beautiful apartment (complete with amazing pool, and despite the 31 degree outside temperature, a hot tub). It was lovely to get a taste of home, and to get the low down on life in Singapore. 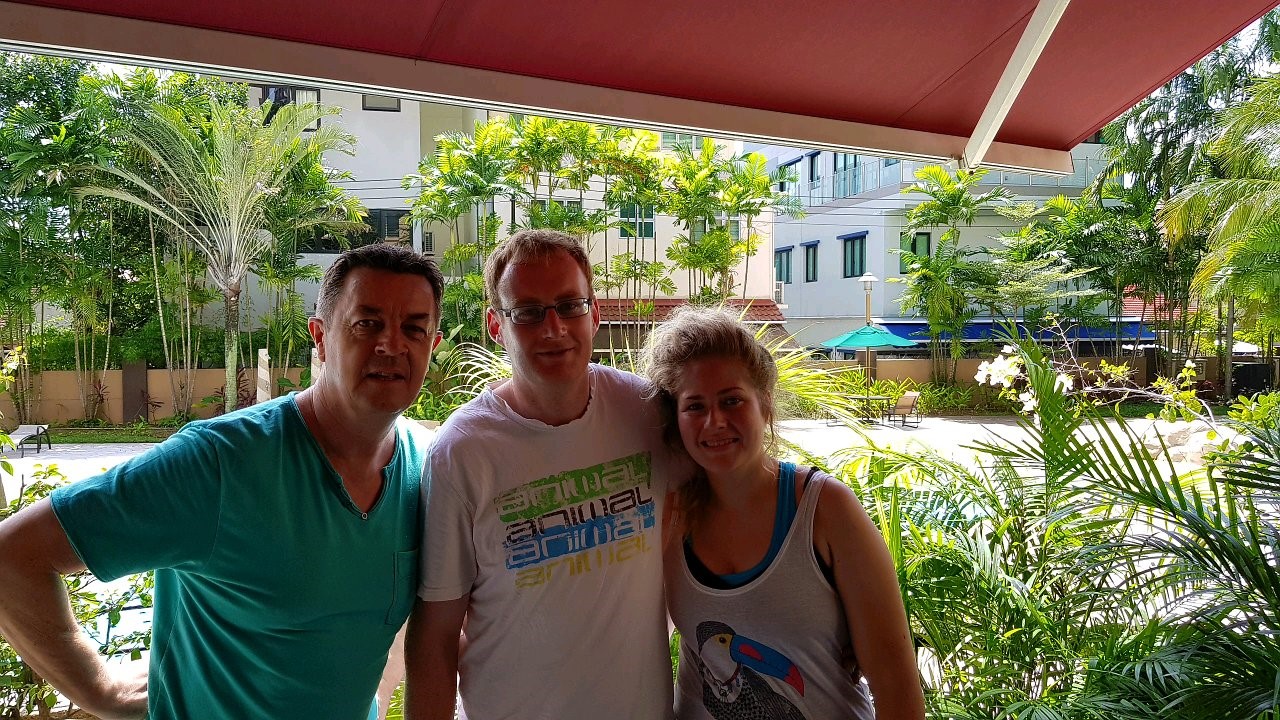 Shane and I with Billy 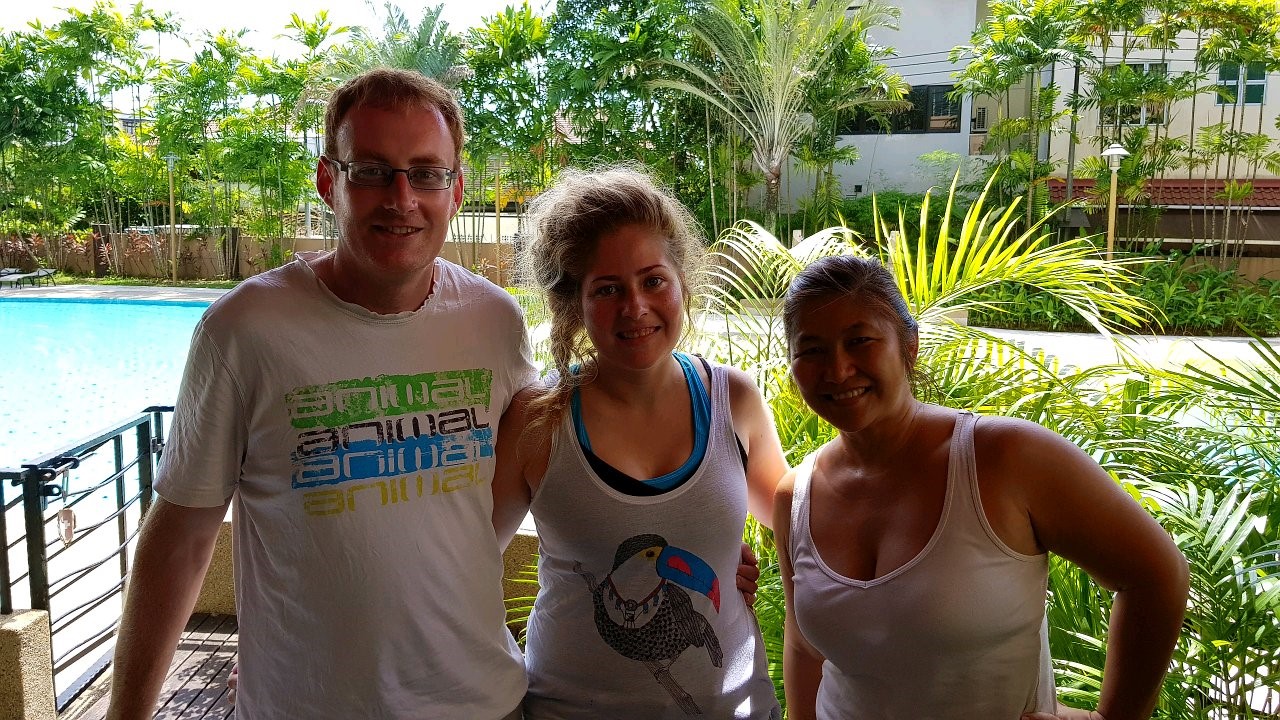 Shane and I with Sonia

From Billy and Sonia’s place, we headed straight to the airport to catch our flight to Bali, keeping our fingers crossed that Bali’s volcano Mount Agung would stay quiet for the next couple of weeks. We enjoyed our short city breaks in Kuala Lumpur and Singapore, but by the end of the week we were ready for peace, tranquillity and Christmas dinner on Indonesia’s most popular island.

One thought on “KL and Singapore: a tale of two cities”