“We were looking forward to peace, tranquillity and Christmas dinner on Indonesia’s most popular island”

These words are taken from our last blog post, in the good old days when we were excited and optimistic about our forthcoming trip to Bali.

While we did manage to find Christmas dinner, we weren’t so lucky when it came to peace and tranquillity. Our experience of Bali turned out to be a little less “eat, pray, love” and a little more “You want massage? Marijuana? Boyfriend?”, with some bad weather and a stolen phone thrown in for the ultimate miserable Christmas experience.

We spent our first week at Solid Surf and Yoga House in the trendy area of Canggu. At first sight, the other people staying at the surf house seemed a little intimidating. Everyone was toned and tanned. We heard someone describe surfing as “so much more than a sport – it’s a lifestyle”, and I nearly threw up in my mouth. With zero surfing experience, pasty bodies and worn out backpacker clothes, Shane and I do not exactly embody the “surfing lifestyle” (whatever that is). But, we were keen to learn how to surf, and with daily surfing lessons, twice-daily yoga sessions and a free scooter complete with a surfboard rack, the Solid Surf House seemed to be the place to do it.

When we got to the beach for our first lesson, we discovered that appearances can be misleading. The intimidating surfer crowd seemed a lot less intimidating when they were falling off their surfboards, and everyone was friendly, encouraging, and supportive. We began to make a few friends, and had a shared chuckle at the “surfing is a lifestyle” nonsense we’d heard earlier.

Unfortunately the surfing was less successful than the socialising. Shane and I discovered that neither of us are naturally talented, which while not surprising, was still a little disappointing. We tried and failed to stand up on the surf board several times, nearly managing it on the odd occasion, but mostly falling off and ending up tangled in the rubbish that fills Bali’s beaches. What felt like seaweed around my leg was in fact a few plastic bags, and wading through layers of filth to get into the sea wasn’t exactly the spectacular surfing experience I’d hoped for. 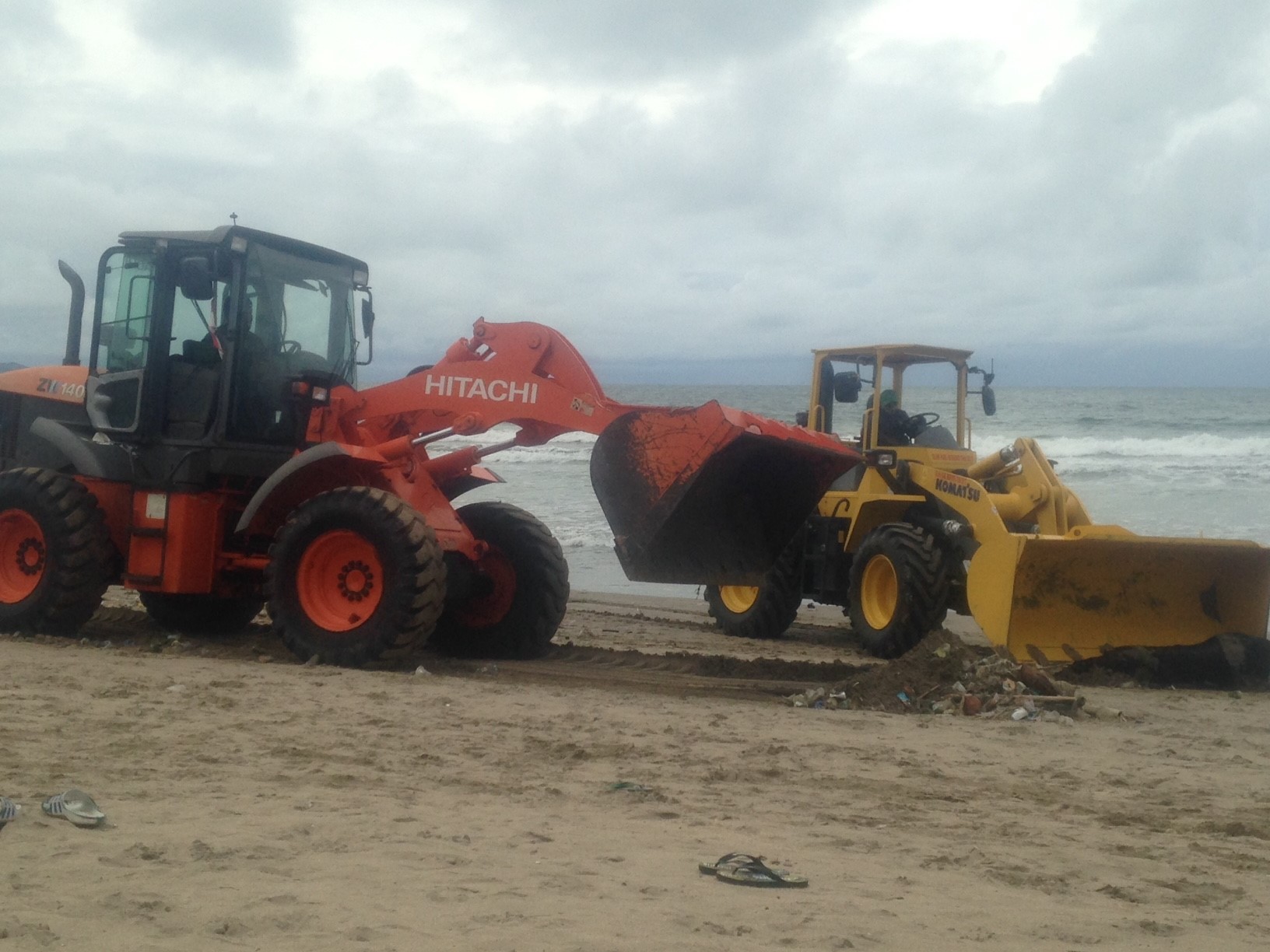 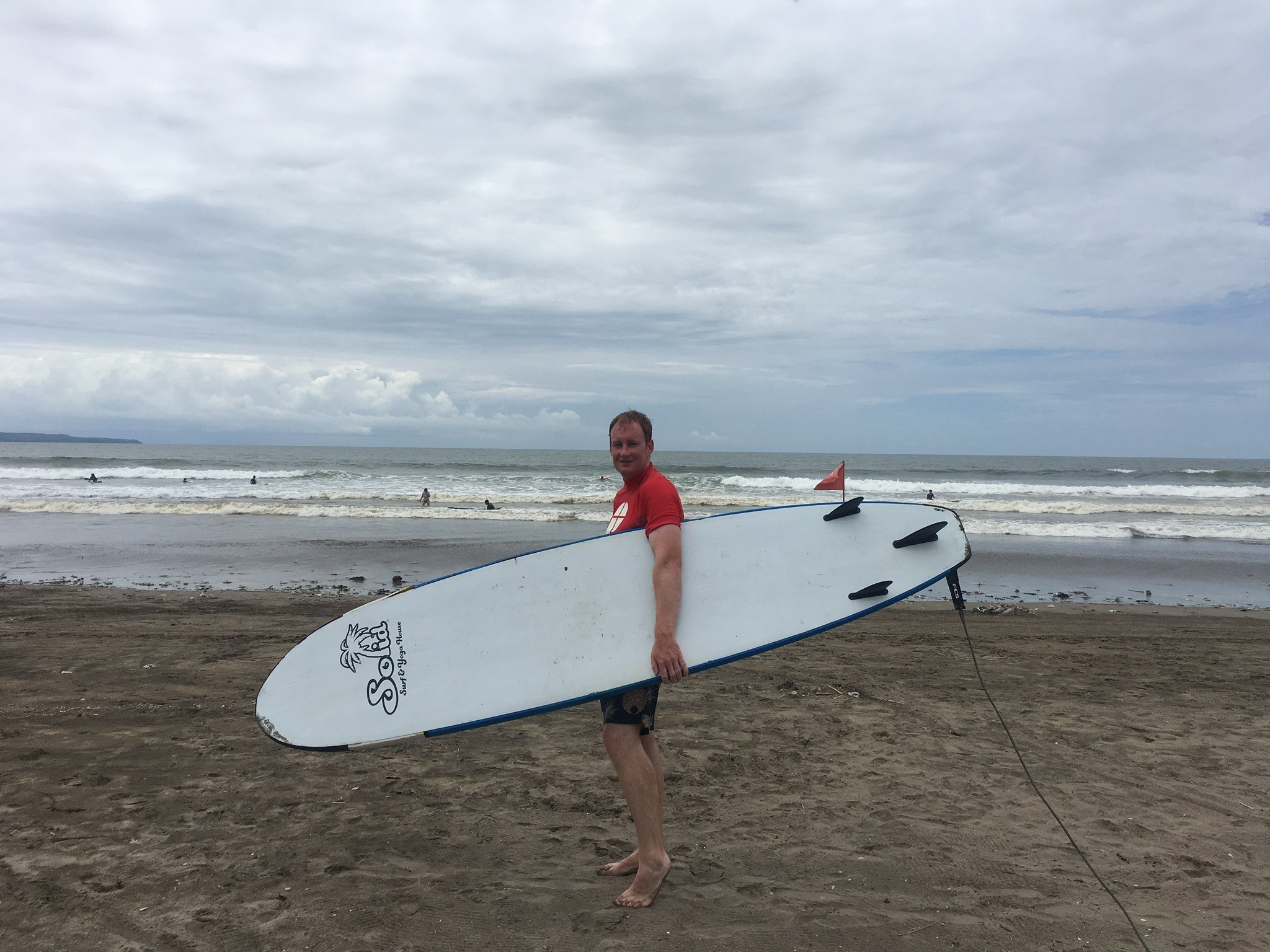 Shane getting ready for the waves

Our second day of surfing was even worse. Sunshine had turned into constant, never-ending rain, which had washed more rubbish from the rivers into the sea and onto the beach. Instead of wading through it, we were taken to a different surf spot: Serangan beach at Turtle island, on the opposite side of Bali. Traffic in Bali is unbelievably slow, so it took well over an hour to drive the 20km from Canggu to Turtle Island. Once we got there, the rain and wind had picked up, the current was strong, and we spent the best part of an hour paddling off the beach to reach some decent waves. Of course, once the waves came, I was knocked off the surfboard immediately, and had to start the process again.

The waves were huge, and they broke over a reef, which I managed to bump into when I fell off the surf board. Eventually, tired of being battered by waves, the reef, the wind and the rain, and rolling around in what felt like a washing machine, I decided to paddle back towards the beach. As I paddled, a giant wave scooped me up, and I enjoyed what may be my new favourite sport – surfing lying down. As I lay on the board, too terrified and confused to try to actually surf the wave, I found myself back on the beach in no time. “This would be awesome”, I thought, “if I could actually surf.”

Unfortunately, the weather in Bali (more rain, more wind) somewhat scuppered our plans to become serious surfers in a week. Surf lessons were cancelled for two days, and too much rain coupled with an ineffective drainage system turned the streets of Canggu into a giant puddle. Walking down the street became extremely hazardous, so we stayed in, watched DVDs and turned our attention to yoga instead.

A video of Bali’s glorious weather

Like surfing, yoga did not come naturally to either of us. We were the least flexible people in the yoga class at all times, and spent most of the sessions trying to find ways to endure the pain of the various positions, rather than achieving inner peace. While everyone else was perfecting their downward dog, Shane and I exchanged knowing, wincing glances across the room – code for “no, I can’t do it either.” Nevertheless, we enjoyed the peaceful aspects of yoga (particularly the parts spent lying down in the ‘resting pose’). Like surfing, I discovered that I liked the horizontal parts of yoga the best.

Once the weather improved a little, we were able to attempt to surf at the beach again, with slightly more success: I discovered I had been trying to stand up on the wrong side the whole time, and we both managed to get up on the board and actually surf a little for a few precious moments. 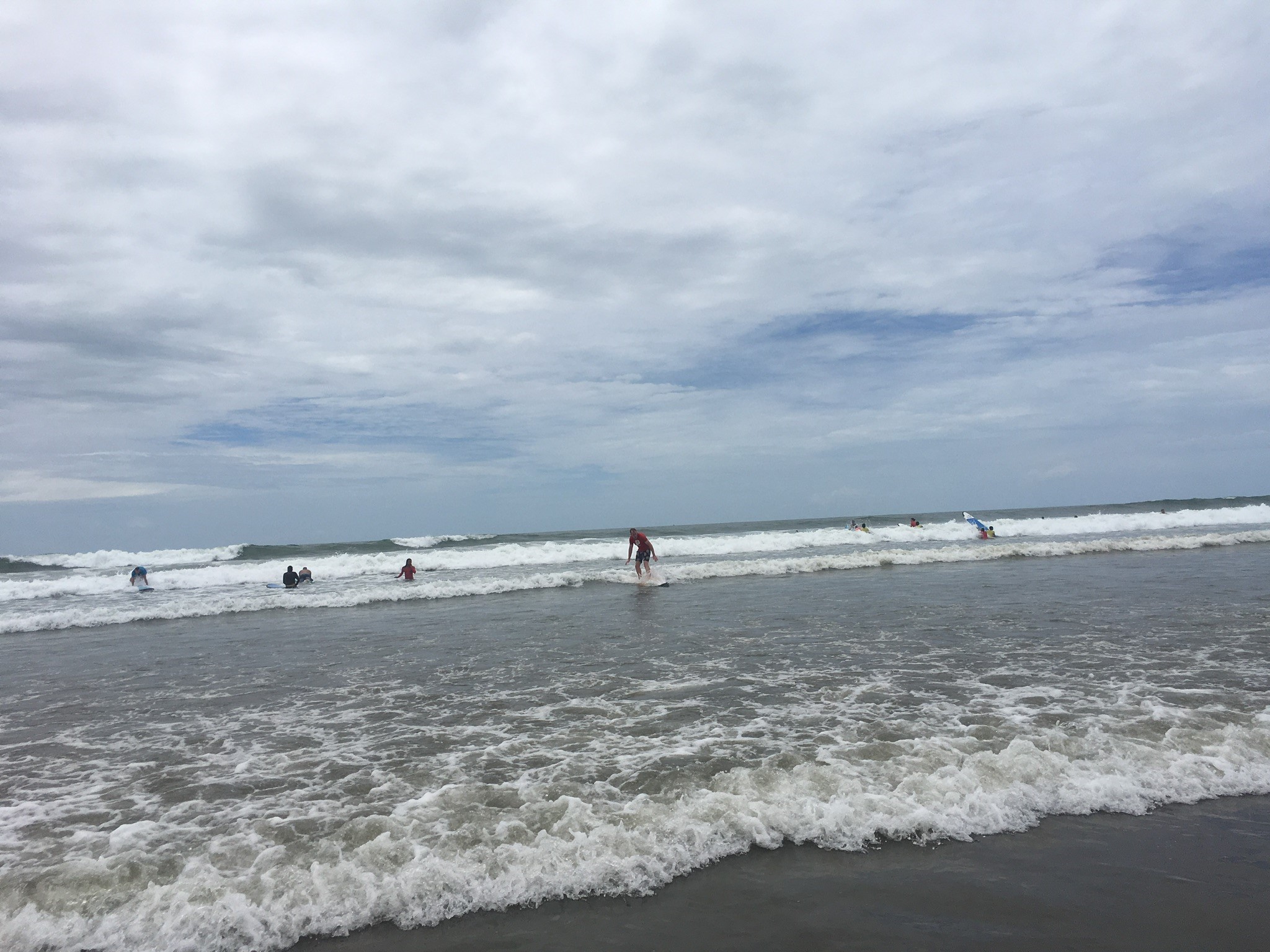 Shane getting the hang of it

We were also able to venture further outside the surf camp, and took our scooter to nearby Kuta to meet up with a few familiar faces. Some the group we had travelled with in Sumatra on our gadventures trip had arrived in Bali and were staying on Kuta beach, and we planned to surprise them at their hotel and join them for their last meal before everyone went their separate ways.

We knew the traffic was bad in Bali, so we left an hour and fifteen minutes to drive the 14 kilometres from Canggu to Kuta. Unfortunately it wasn’t enough, and we were half an hour late for the surprise meal. I ended up walking the last two kilometres because the traffic was so gridlocked we assumed I would get there faster, but once on my own I was hassled virtually every metre I walked along the street. Did I want to buy something from the shop? Did I want a scooter? A taxi? Another form of transport? A massage? A boyfriend? Some drugs? Once we met up with Hendri, Petra, Georgina, Intisar, Sheree, Lucy, Ryan, Mollie and Carlos, they seemed just as happy about being in Kuta as we were. “It’s like magaluf but for Australians”, quipped Carlos, and although I have never been to magaluf, the seedy nightlife and bucket-filled streets looked an awful lot like my mental image of magaluf… except dirtier. 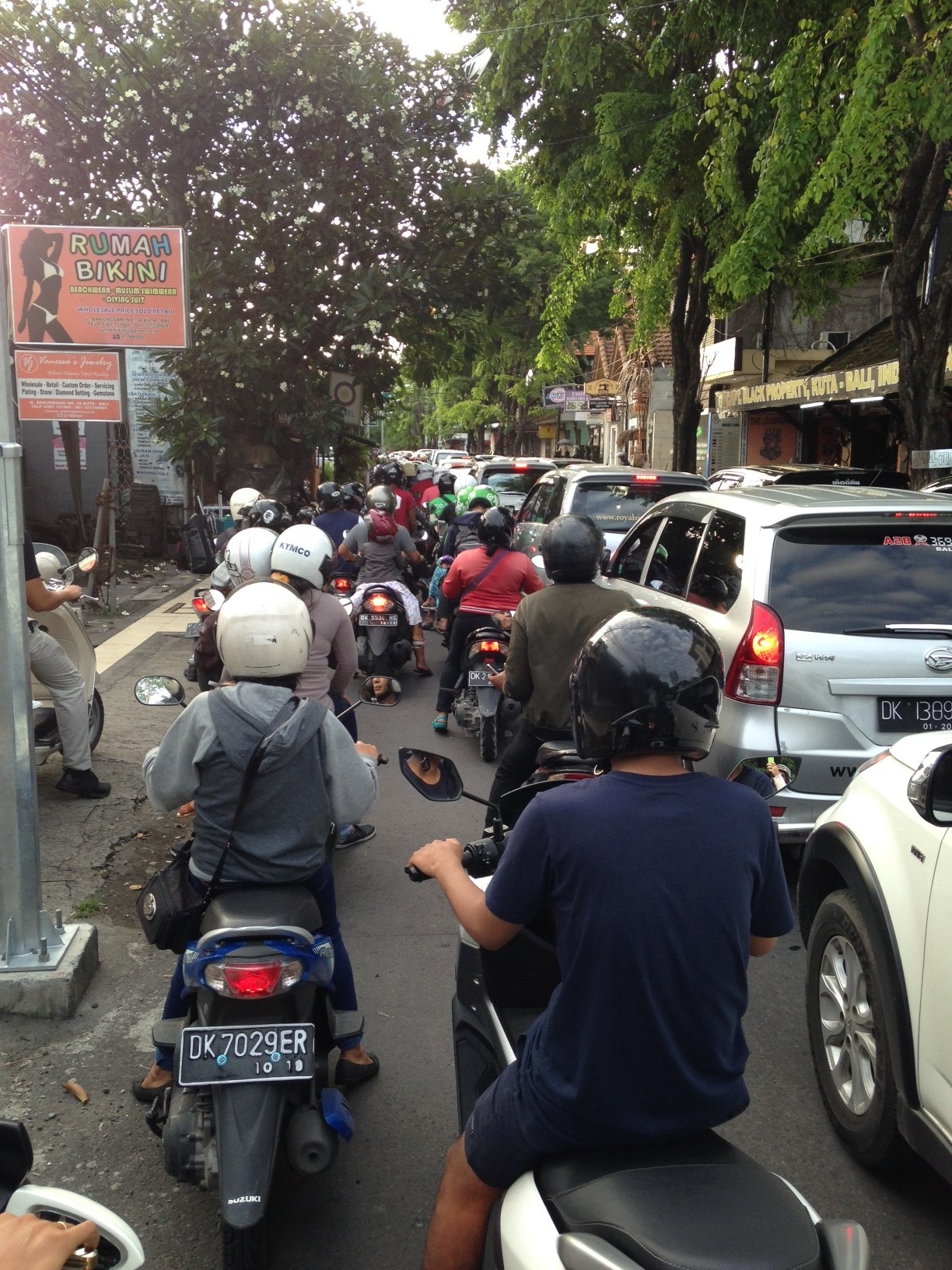 Your average traffic jam in Bali

After a pleasant reunion with our gadventures buddies, we headed back to Canggu, hoping the return trip wouldn’t be as stressful.

Sadly, it was far worse. While Shane drove the scooter, I sat on the back, using my phone to navigate through the streets. Most of the time we managed to scoot along at a good speed, but the roads were dark, confusing and not well signposted. As we reached the outskirts of Canggu, I was continuing to navigate, when all of a sudden another scooter bumped into us and my phone was snatched from my hand. We were lucky that we stayed on the scooter, and that my bag with the cash and credit cards remained firmly attached to me, but I was devastated to lose my phone, and we were now lost in the dark, with no way of navigating back to the surf camp.

We pulled in and ventured into a local shop to ask for directions. Without a shared language or the google translate app, we found it difficult to explain our predicament, and the shop keeper obviously felt sorry for us but had no idea where we trying to go. We no longer felt safe driving around endlessly on the scooter, hoping we might see somewhere we recognised, but luckily I saw a sign for a beach club that I knew wasn’t far from the surf camp. We headed for the beach club, making a wrong turn down a dark street where we asked again for directions. This time, the man we asked spoke English and told us roughly where to go. “But be careful”, he added. We sighed – we would try our best.

Eventually we managed to find the surf camp. I phoned my brother on Shane’s phone to ask for stolen-phone-related advice, and then tried to sleep, feeling an empty space beside me where my phone usually lives. It was a sad night.

Our time in the surf camp was just about up. Shane had a final (more successful) attempt at surfing while I did laundry, mourned the loss of my phone and considered a trip to the local police station to report the theft. This idea was swiftly forgotten when I discovered it would take all day and cost £25 to file a police report, and that we weren’t entitled to claim for it on our insurance anyway.

The next day we endured another terrible, traffic filled journey back to Kuta, where we had booked an upmarket hotel for three nights over Christmas (thanks to our friends for their generous wedding gift of a hotel voucher).

The hotel was an oasis of calm, but outside, Kuta was still Kuta. The beach was still full of rubbish, the streets were still full of people hassling us, and the traffic was still insane. We spent Christmas Day missing our families, eating chocolate and wishing we were somewhere else.

Thankfully, the day was saved by Shane’s decision to eat Christmas dinner at an all-you-can-eat buffet at the Hard Rock Hotel (where Christmas dinner includes spaghetti bolognese, a chocolate fountain and, of course, Indonesian fried rice, as well as the usual turkey and potatoes). The food was great, but what was even better was bumping into our friends from our Sumatra trip: Lucy and Sheree, who had had the same idea and were also making the most of the all-inclusive food. 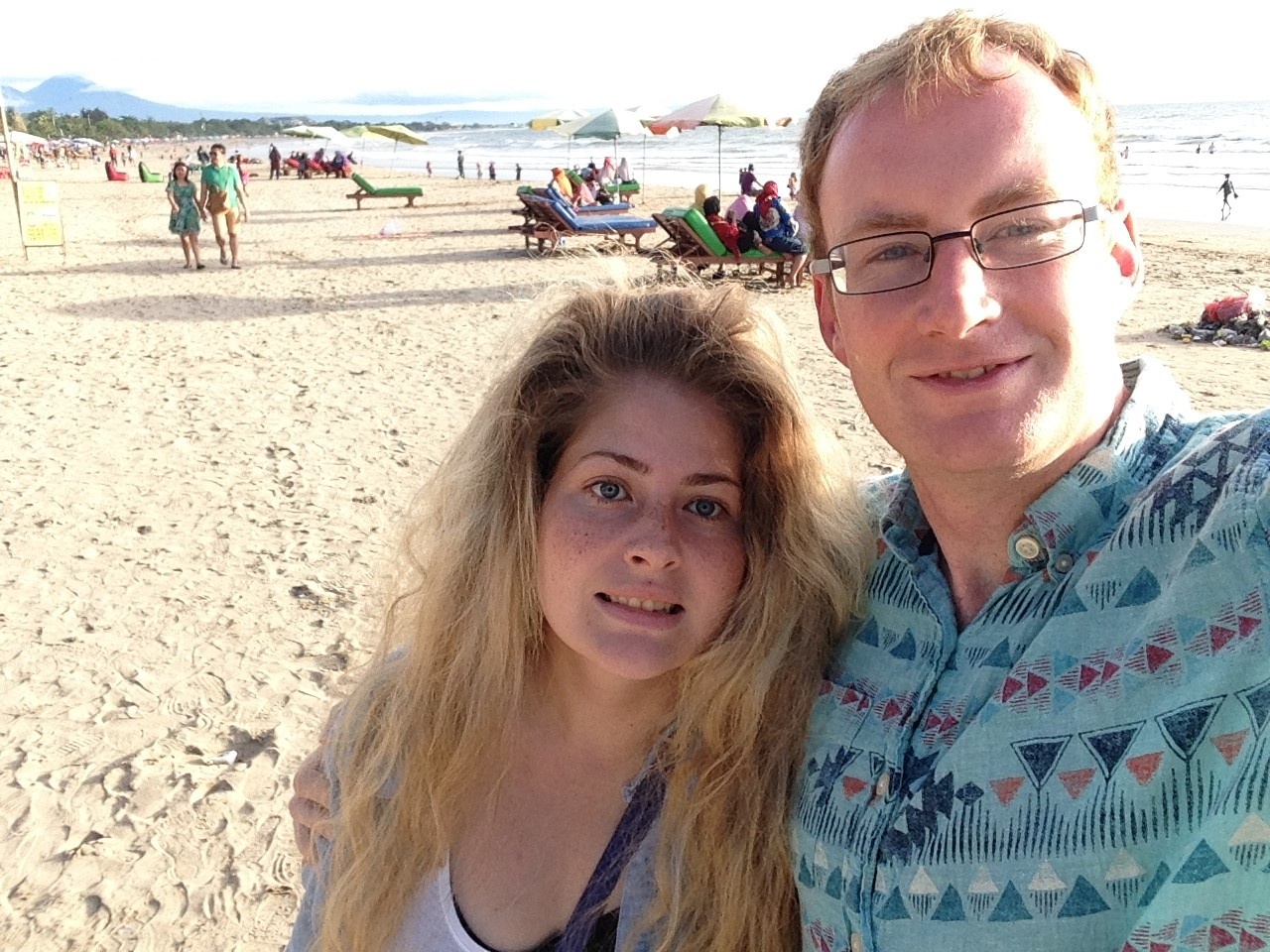 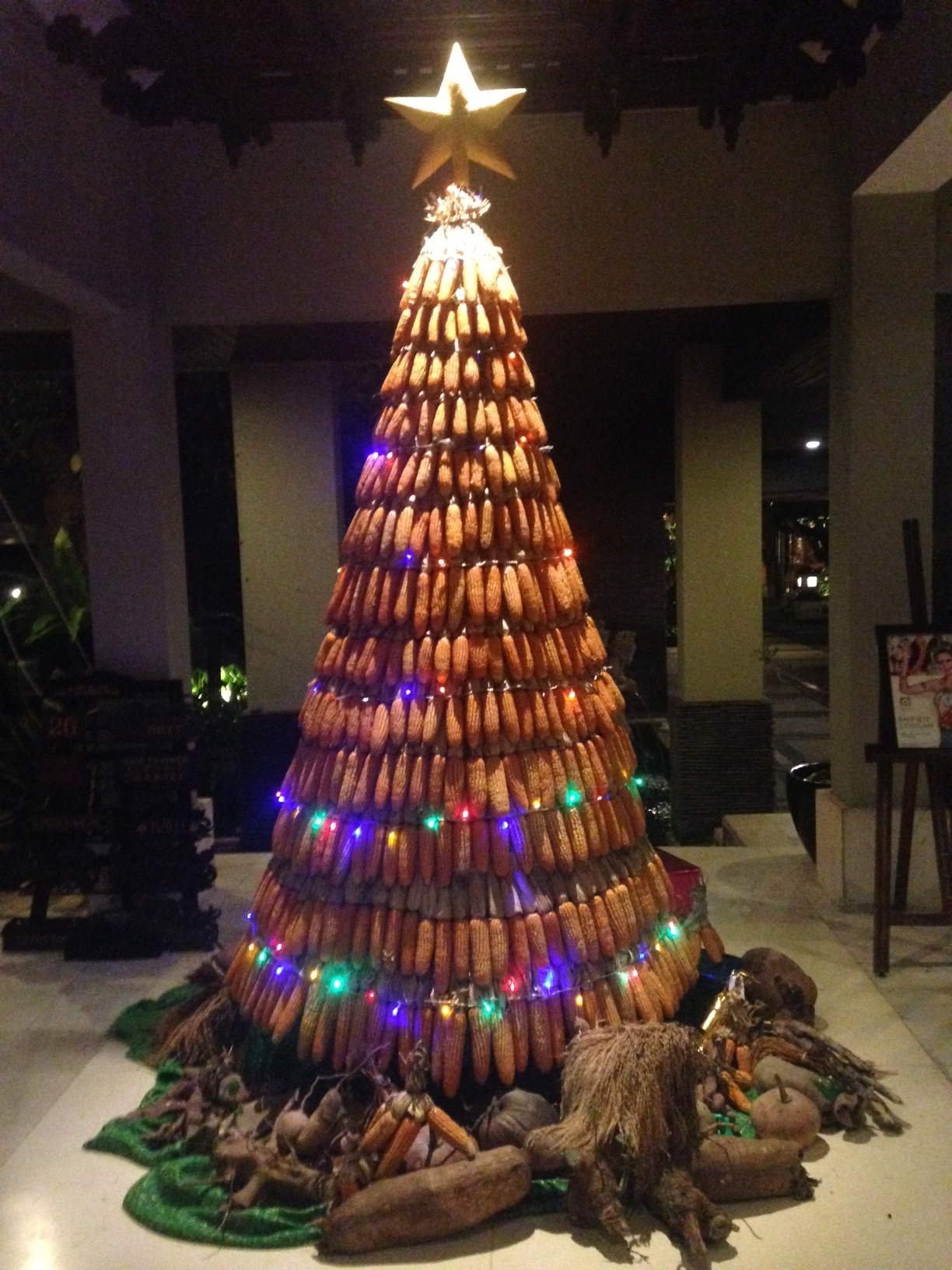 Christmas tree made of corn 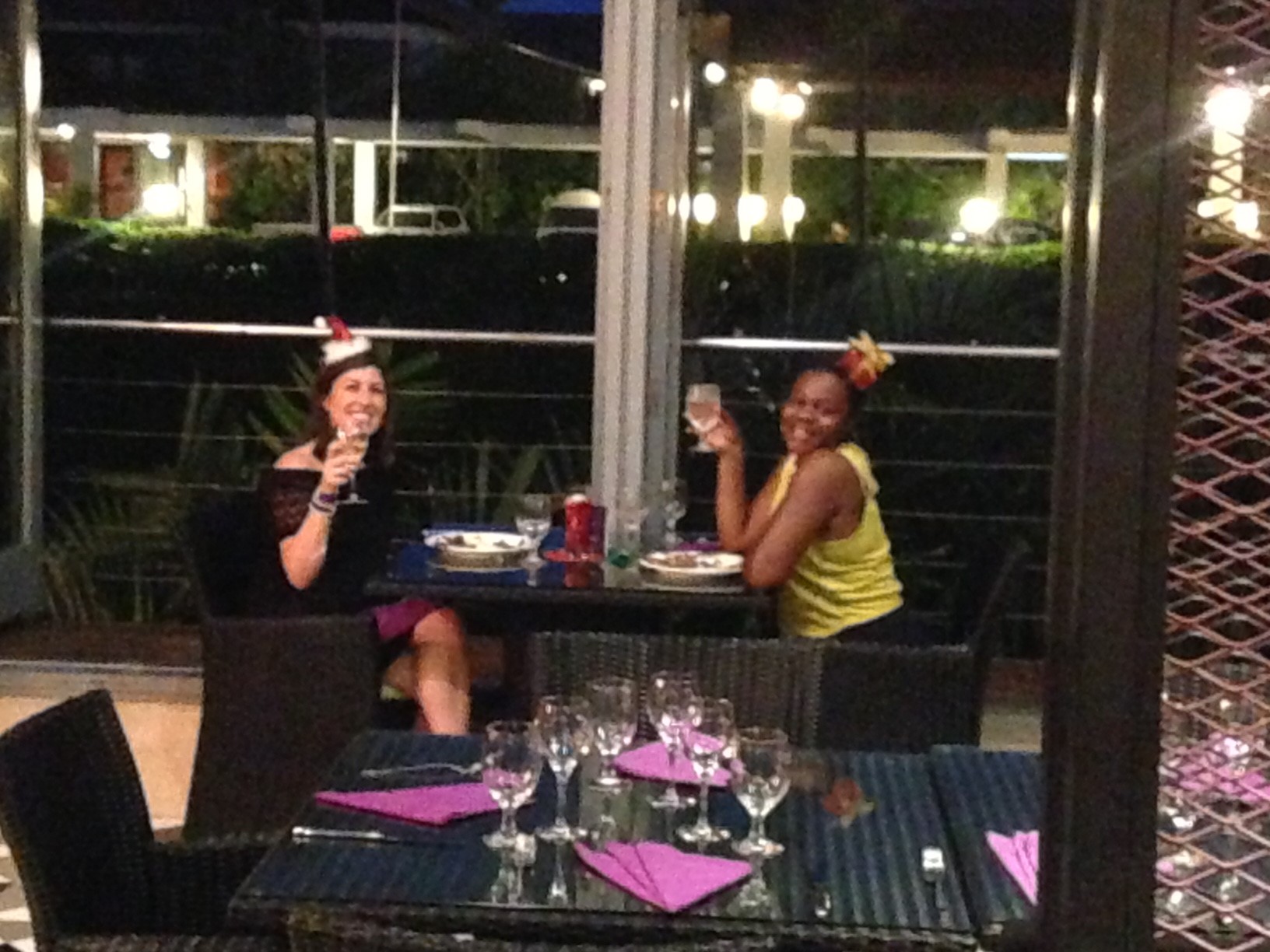 With Christmas over and our stay in Kuta complete, I was overjoyed to leave Bali behind for a few days. The crazy traffic, disgusting beaches, sneaky phone snatchers and pouring rain were starting to get me down. I didn’t just want to leave Bali – I wanted to give up and go home altogether. But we had one more mini-adventure in store before we were due to arrive in Australia; a quick trip to the island of Flores and Komodo National Park, where we hoped to see something other than traffic and litter: perhaps a manta ray, a turtle, or a famous Komodo Dragon.